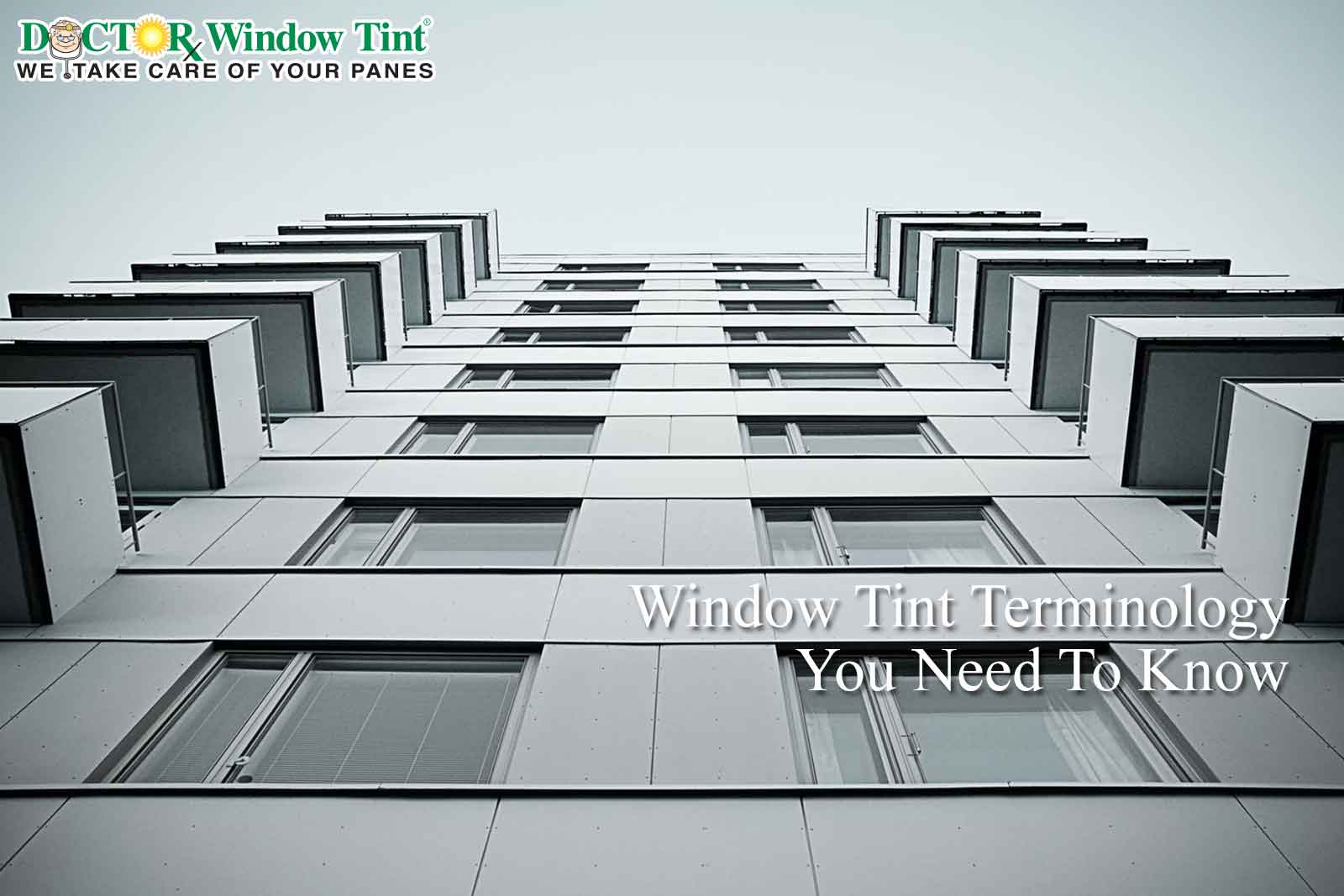 Finding the ideal window film solution to your tinting needs takes careful planning. The tinting industry offers a range of products that extend well beyond automotive care. The larger the project, (from homes to commercial buildings) the more crucial it is to familiarize yourself with important terminology.

Know what tinting experts are saying by learning these essential window tint terms.

Visible Light Transmittance (VLT) is the percentage of visible light that passes through a window. The lower the VLT percentage, the less light passes through. For example, a VLT of 40% only allows 40% of light to be seen and blocks the other 60%. Naturally, the more tinted the lens, the lower its VLT percentage.

Visible Light Reflectance (VLR) corresponds to the percentage of visible light that’s reflected by a film or window glass system. The higher the VLR percentage, the more light is reflected. VLR can be used to determine how well a film controls against glare. A typical non-tinted window reflects about 8% to 10% of visible light.

A film’s U-Value (or U-Factor) is its ability to transfer heat between the inside and outside of a building. This is measured through one-square-foot of window film for every one-degree Fahrenheit change in temperature.

The U-Value is dependent on temperature in its ability to transfer heat. Typically, the lower the U-value of a window’s film, the less energy is needed to keep the indoor temperature cool and comfortable.

The Shading Coefficient is a ratio that measures the total solar heat that can pass through a film to the total heat that would pass through if the windows were clear (without tint). The lower the value, the more advanced a film’s shading capabilities.

This film consists of embedded metal particles. This tint is designed from several layers that work to block heat from the sun and strengthen the bonds within windows. Also, different elements produce different colors and properties that can meet a wide array of consumer preferences.

Sputtering is a form of vapor deposition that bonds metal particles, like copper, silver, chromium, and gold onto film. The atoms are deposited evenly on the surface creating a thin, fine layer of film. The fine layer makes the sputtered film suitable for blocking direct sunlight with a subtler finish.

Dyed window tint is comprised of an adhesive layer on the bottom, a dyed layer in the middle, and a final coating of polyester on the surface. The adhesive layer is used to stick the film to the window’s surface, while the polyester coat protects the window from damage.

Hybrid tint is made up of both a dyed (polyester) and metalized layer. The dyed layer allows the film to block ample light while the metallic component creates a sleek, dark appearance. Hybrid tint combines the advantages of polyester and metallic tint to create the ultimate high-performance window film system.

This film contains ceramic molecules that aren’t metallic nor conductive. Ceramic tint is designed to reflect the highest amount of UV and infrared rays while absorbing the highest levels of light. This allows for maximum visibility and solar protection.

Film installations are used with attachment systems for increased fragment retention. The attachment system tightly binds the frame and film in place, creating a single piece with no weak points.

Curing time is the length of time it takes for all materials (in solution form) to evaporate, and for the film’s adhesive to fully bond. Curing often takes up to three days in ideal weather conditions. You may be advised to avoid tampering with your windows during this period.

Having a better understanding of window tint terms will help you make the best decision for your tinting needs. Talk with a tinting expert at Doctor Window Tint® to learn even more about your best window film solution today!